Undocumented Workers Face Obstacles Qualifying for Benefits During the Pandemic 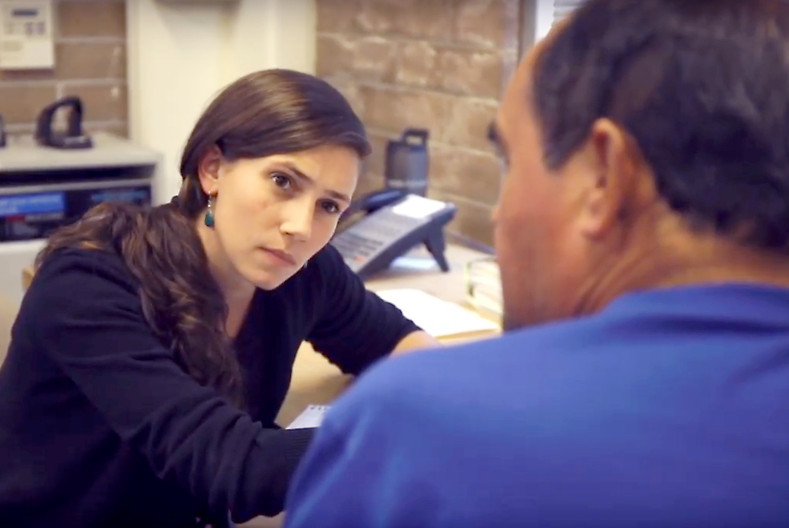 Before the COVID-19 pandemic, Hector had a stable job as a cook at an Italian restaurant in Oakland. Suddenly, in mid-March, about a dozen workers were laid off, including him.

“There was a low clientele and the restaurant wasn’t doing well,” said Hector, who didn’t want to provide his last name due to his undocumented status.

Hector, a 45-year-old married father of three and a grandfather, was left struggling to care for his family. Because he is undocumented, he does not qualify for unemployment insurance.

Yet many undocumented workers are unaware that they can apply for other state benefits that are available to out-of-work employees.

Hector recently found out that he may qualify for disability insurance payments when he visited a local health clinic to take care of a painful ingrown toenail and other health issues. Since a car accident two years ago, “I suffer from a lot of headaches, my arm and my hand hurt a lot, too,” said Hector, a native of Mexico.

His doctor said that due to his multiple health problems, he might qualify, so he is in the process of applying.

“I hope I do get approved because in every paycheck we get deducted an amount of money [for disability] and when the government does that, they don’t ask us if we have papers or not,” said Hector. “The small amount of savings we had is disappearing.”

Many advocates and service providers say the coronavirus and stay-at-home orders have had a disproportionately high impact on undocumented and low-wage workers.

Undocumented workers who lost their job during the pandemic because they are sick, quarantined or ordered to stay at home because of chronic conditions don’t qualify for unemployment. But they can qualify for state disability insurance, paid family leave and workers compensation.

There are many obstacles however: The only way to fill out the application without a Social Security number is to submit a paper application. Plus, they need a doctor’s authorization, while many undocumented workers are uninsured and can’t afford doctors.

Alexis M. Alvarez, a senior staff attorney at the San Francisco-based nonprofit Legal Aid at Work, is advising Hector with his process of applying for disability payments.

“Both of those benefits, paid family leave and state disability insurance, your citizenship and immigration status doesn’t matter because they don’t require you to be able and available to work in the same way that unemployment insurance does,” said Alvarez.

Undocumented workers may qualify for family leave when they need to leave work to care for a family member with an illness or disability.

In both cases, they have to provide a doctor’s note.

California is home to more than 2 million undocumented immigrants, making up nearly 1 in 10 workers in the state. About two-thirds have resided in the state for longer than 10 years, according to the Public Policy Institute of California.

Many are taxpayers. In 2014 undocumented immigrants in California paid about $3.2 billion in state and local taxes.

In addition, like all workers, undocumented employees have money deducted from each paycheck to pay for disability insurance.

Alvarez said whether it is state disability insurance or family leave, the worker doesn’t need a Social Security number or Individual Taxpayer Identification Number (ITIN). But they must provide proof of income like a W-2.

To apply, workers must apply on paper and leave the spot blank asking for a Social Security number. Alvarez said the response takes two to three weeks.

The application can be obtained from the state Employment Development Department through its website. “The other couple of places where I know you know people can get copies, if there are some, is through community organizations, medical offices or other nonprofits like ours that keep paper copies in their offices,” said Alvarez.

However, with social distancing, many of these places are closed to the public, leaving affected employees few options.

In addition, language problems or lack of experience using a computer are other barriers that stop undocumented workers from applying.

California Insurance Commissioner Ricardo Lara recently announced that workers sickened by COVID-19 are eligible for workers’ compensation benefits regardless of their immigration status. This includes workers engaged in front-line occupations such as health care, emergency services, food production, sales and delivery, among others.

“This unprecedented pandemic has sparked questions and concerns among essential workers in the immigrant community who are showing up for work every day, bringing us vital goods and services,” Lara said in a statement. “Hardworking Californians who are exposed to COVID-19 are entitled to workers’ compensation benefits if they fall ill, regardless of their immigration status.”

But the reality is that most workers affected by the crisis are not eligible because the funds are for people who are sick, said Kim Oulliete, an attorney with Legal Aid at Work.

“And the vast majority of people right now have just been laid off,” she said. “And where the state has been directing most people for assistance is unemployment insurance, but undocumented cannot apply.”

Advocating for the most vulnerable

Legal Aid at Work united with a coalition of more than 100 organizations to urge Governor Gavin Newsom to create a “Disaster Relief Fund” to help undocumented immigrants until the state’s emergency proclamation is lifted and people return to work.

“Already, undocumented immigrants are living precariously—over half live at or below 150% of the poverty level,” the letter says. “Accordingly, it is imperative that the state meet these workers’ basic needs so that they can comply with the Shelter in Place Order without fearing that they will not be able to feed and house their families.”

Members of the state’s Latino Legislative Caucus have called on Newsom to extend the California Earned Income Tax Credit to undocumented workers who file taxes with an ITIN number and provide MediCal benefits to all low-income undocumented adults.

Newsom recently signaled that the legislature is working on a relief package for undocumented immigrants but did not provide specifics about the plan.

Maria Hernandez, a 44-year-old housecleaner, hasn’t had work since the Bay Area implemented the nation’s first shelter-in-place order in mid-March.

“I can’t apply for many resources and this gives me so much anxiety,” Hernandez says. “We are only one family and there are tons of families that are suffering in those moment for being undocumented, and there is a lot of fear to ask for help because of the fear of being deported, of losing housing. My community is very vulnerable.”

As pressure mounts on state and federal officials to support the taxpaying undocumented workforce, new local resources are popping up to help people.

In the Bay Area, financial assistance programs for undocumented workers affected by COVID-19 related job losses have sprung up in San Francisco, Sonoma County, and Oakland. A relief fund for local migrant youth affected by the state’s shelter-in-place order was launched in Santa Clara, San Mateo, Contra Costa, Marin, San Francisco and Alameda counties, but is no longer taking applications.

“As soon as the Bay Area issued its shelter-at-home orders we started getting calls from folks who were losing their work or wondering about whether they had to go to work because it felt all of a sudden very unsafe,” said Derek Schoonmaker, an attorney at the Oakland-based Centro Legal de la Raza, which recently launched a relief fund for undocumented Oakland workers who have lost jobs or income.

“The clients we work with are often paycheck to paycheck. They are depending on their week’s paycheck to cover basic needs like rent and food, so taking a hit in their income can mean a real scramble to get that together to meet those needs.”

In the past several weeks, Schoonmaker said, the fund has raised roughly $330,000 — primarily from a grant from the City of Oakland, foundations, and individual donors — and has received more than 1,500 applications from undocumented workers. The fund will distribute $500 grants to each applicant, but so far can’t help everyone who applied due to the volume of applications.

In addition, teachers and administrators in the Oakland Unified School District have launched a program where people can turn over their federal stimulus checks to undocumented families.

Yet some of the groups administering grants say their efforts will have a limited impact without broader policy changes.

Across the U.S., immigrant’s rights groups, labor organizations and some lawmakers are calling on national officials to provide relief for undocumented workers ineligible for food and other safety net benefits and left out of the federal government’s coronavirus stimulus checks, with a particular focus on those workers who filed taxes with ITINs.

“The relief checks ignore the contribution of immigrant families and the essential contribution they are making now and missing the fact that they are families that have been paying into the system and contributing in a formal way to our economy,” said Erin Quinn, senior staff attorney at the Bay Area-based Immigrant Legal Resource Center.

Congressman Lou Correa (D-CA) has introduced the Leave No Taxpayer Behind Act, which would ensure that immigrants who filed taxes with ITIN numbers would be eligible for the government’s $1,200 coronavirus relief check.